A while ago I hosted a screening for the film An Island, a film by Vincent Moon about the amazing band Efterklang. This was definitely more than a music/video project, it’s an inspiring look at how important sound is to regional cultures. They are now releasing a limited edition DVD/EP designed by Hvass&Hannibal featuring the photography of Antje Taiga Jandrig and a custom-made cover printed by Stumptown Printers in Portland, Oregon.

The DVD release is limited to 5000 copies and they are all individually numbered. The cover holds 5 postcards and a 35 page booklet with lots of photos and background info written by Efterklang. When ordering the DVD you get the new EFTERKLANG EP ‘Live at Roskilde Festival 2010′ as a bonus! An Island is also available digitally after the Pay-What-You-Want model. Available via anisland.cc.

The Ghost of Piramida efterklang

PERMANENT Invites You: The Ghost of Piramida Screening 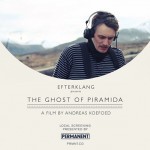 The Ghost of Piramida premiered in November 2012 in Amsterdam at the world’s biggest documentary film festival IDFA, and here the film was … Continue reading »»»