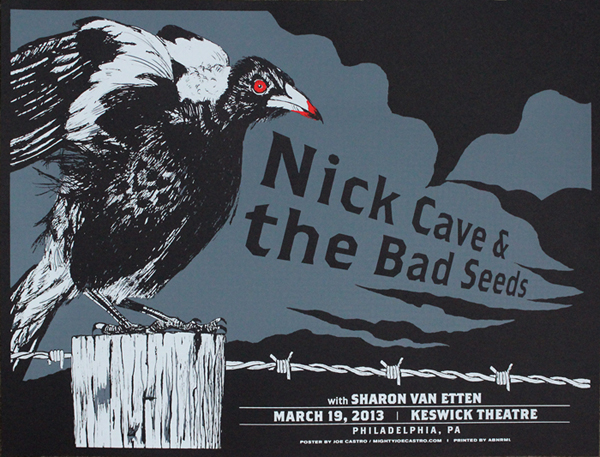 I was super stoked to design a poster for one of my favorite bands of late, Nick Cave & the Bad Seeds, for their gig last night at the Keswick Theatre, just outside of Philadelphia. It’s a 3 color silkscreen on 100lb Black French Construction paper and only 50 were produced. These were specially commissioned by the promoter, AEG Live, and were given to the band as a gift and were not for sale at the venue. However, I do have a small handful of these available through my Etsy shop so, if you dig it, pick one up soon because once they’re gone, they’re gone.

Anyway, the show last night was incredible – totally blew me away. The band were water tight, like the James Brown band if they were brought back from the grave and fronted by Edgar Allen Poe. He climbed across the crowd, pushed away all camera phones & thrust his crotch at the adoring masses. Shaman, snake oil salesmen, preacher, rock god – the whole thing had an air of sideshow revival, and I can see the influence he’s had on bands like The Make-Up. And, damn – Warren Ellis is a badass. My only regret is waiting this long to see them live – I won’t miss them again. Best show I’ve seen in a long time, and totally inspiring.

And if you haven’t picked it up yet, definitely grab their latest, Push the Sky Away – then take a midnight drive down some deserted back roads with the sound turned up and enjoy the ride.